October 20, 2014 Spencer All Podcasts, Honest Bicycle Program Comments Off on HBP #1: You Know It When You See It 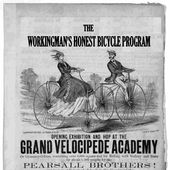 Behold! The first-ever episode of The Workingman's Honest Bicycle Program is live!

What is WHBP? It's an informal discussion between friends about bikes, bike racing and bike riding. You can think of WHBP as a “ronde van yer neighborhood.” As mattio puts it, “we know what we're talking about with all this foreign bike stuff, but we keep it local.” We'll talk about competition, commuting, cool concept bikes, gear, philosophy and whatever else strikes our fancy. Think of WHBP a little bit like the recovery ride of cycling podcasts. We hope you'll come along with us.

Show Notes for Episode 1: You Know It When You See It.

In this inaugural episode, Greg and mattio discuss the news that Tim Johnson has been testing a cyclocross bike with a – GASP – suspension fork, and go on to talk about the role and significance of technological development in bicycle racing. They then introduce a rotating segment, called “Rant du Jour, Thumbs Up and Whuuuu?” Things get started off on a positive note with a brief discussion of the joy to be found on something other than a speedy racing bike – but is it that just foreshadowing for rantier times ahead? Having gone on long enough for one episode, Greg and mattio conclude the show, but a first-episode-special aftershow can be heard when the music fades out, where our hosts argue vociferously about the name of their brand new podcast, discuss the oddities and charms of the Flemish language and mattio amazes Greg with tales of his local liquor store.